Erling Braut Haaland is a Norwegian professional footballer who plays as a striker. He plays for Premier League club Manchester City and the Norway national team. At just 21 years old, Haaland has racked up over 150 career goals. Therefore, he is set to become the highest paid player in the Premier League. A prolific goalscorer, Haaland is recognised for his pace, athleticism and finishing ability. Which earned him the nickname “The Terminator”  by many of his admirers. Erling Haaland is considered one of the best strikers in world football. Haaland’s career so far has been characterized by one thing, which is goals. He has hit the back of the net at an astonishing rate in the six-years since his professional debut. 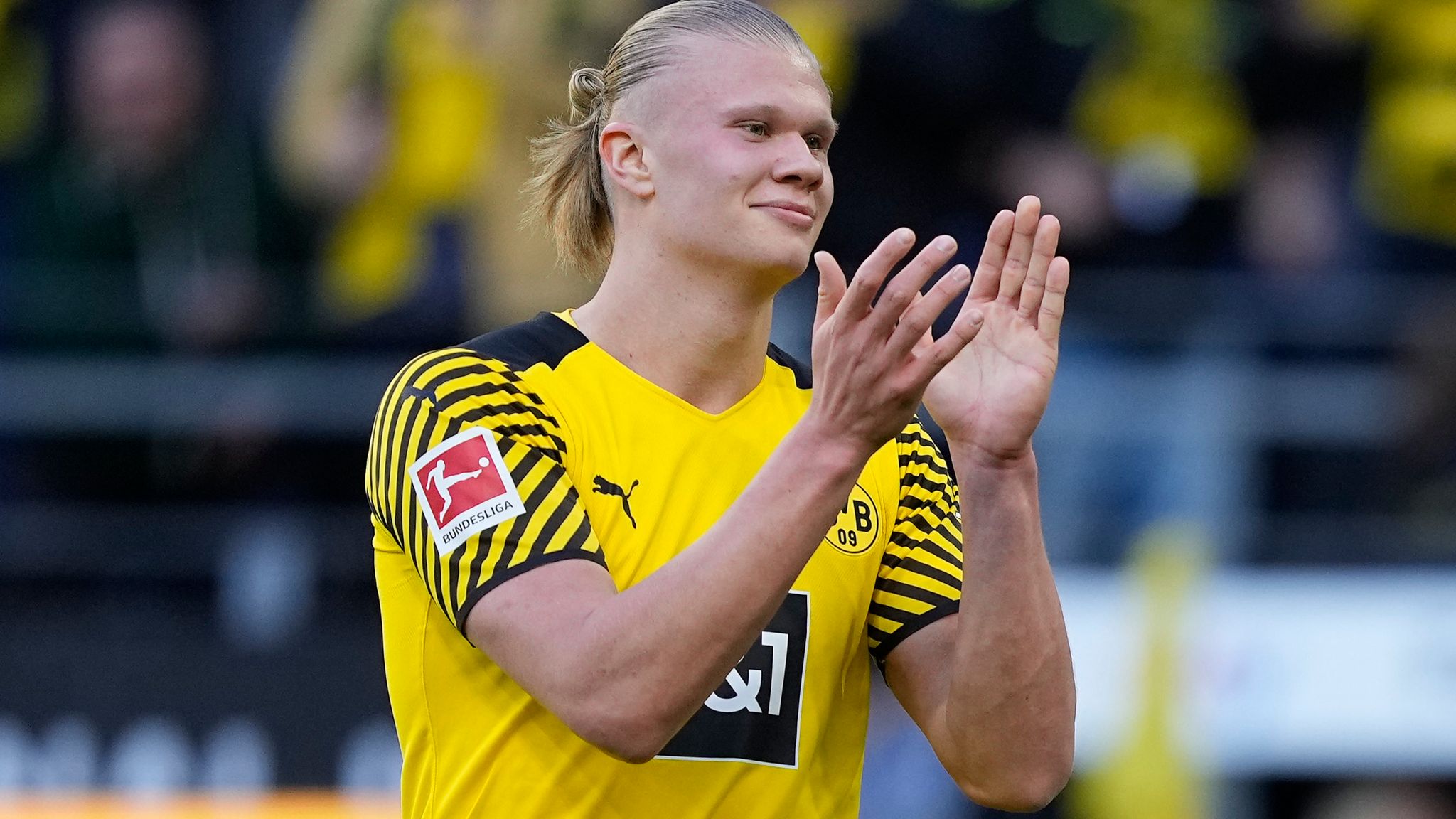 Erling Haaland (full name: Erling Braut Haaland) was born on the 21st day of July 2000 to his mother, Gry Marita Braut and father, Alf-Inge Håland, in Leeds, West Yorkshire, England. The Norwegian hails from a household that lives and breathes sports. Erling Haaland’s sports genes are very good as both his parents were active in athletics. In addition, he receives very good advice and follow-up from the family. At the time, his father, Alf-Inge Haaland – a tough-tackling midfielder – was playing for Leeds United in the Premier League. Erling moved to Norway with his family when he was three years old in 2004 following his father’s retirement from playing football. Haaland’s potential as a player was evident from an early age, and the young footballer joined Norwegian side Bryne, where he was fast-tracked through the club’s youth teams. 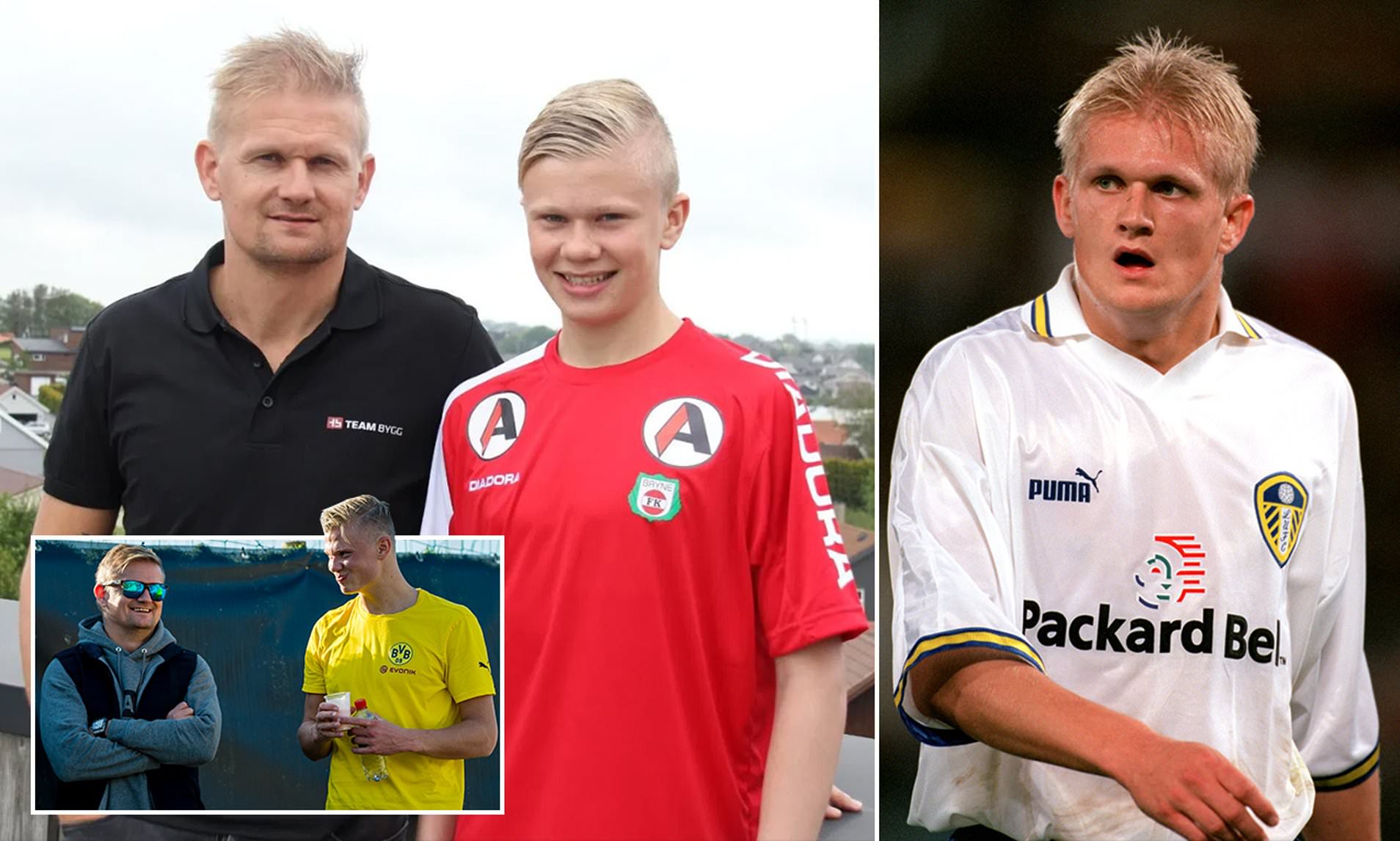 Alf-Inge Haaland, aka Alfie Haaland, is the father of Borussia Dortmund striker Erling Haaland. He is also a Norwegian former professional footballer. The man notably played in the Premier League for Nottingham Forest, Leeds United and Man City. He played for 10 years between 1993-2003, as well as in the Norway national football team.

Alfie Haaland was born on November 23, 1972 in Stavanger, Norway. Alfie joined Byrne FK’s youth set up in 1979, before making his professional debut 10 years later. He operated as a right back and could play in midfield during his career. However, it sadly ended in 2003 after an infamous tackle by Manchester United legend Roy Keane.

Net Worth and Salary 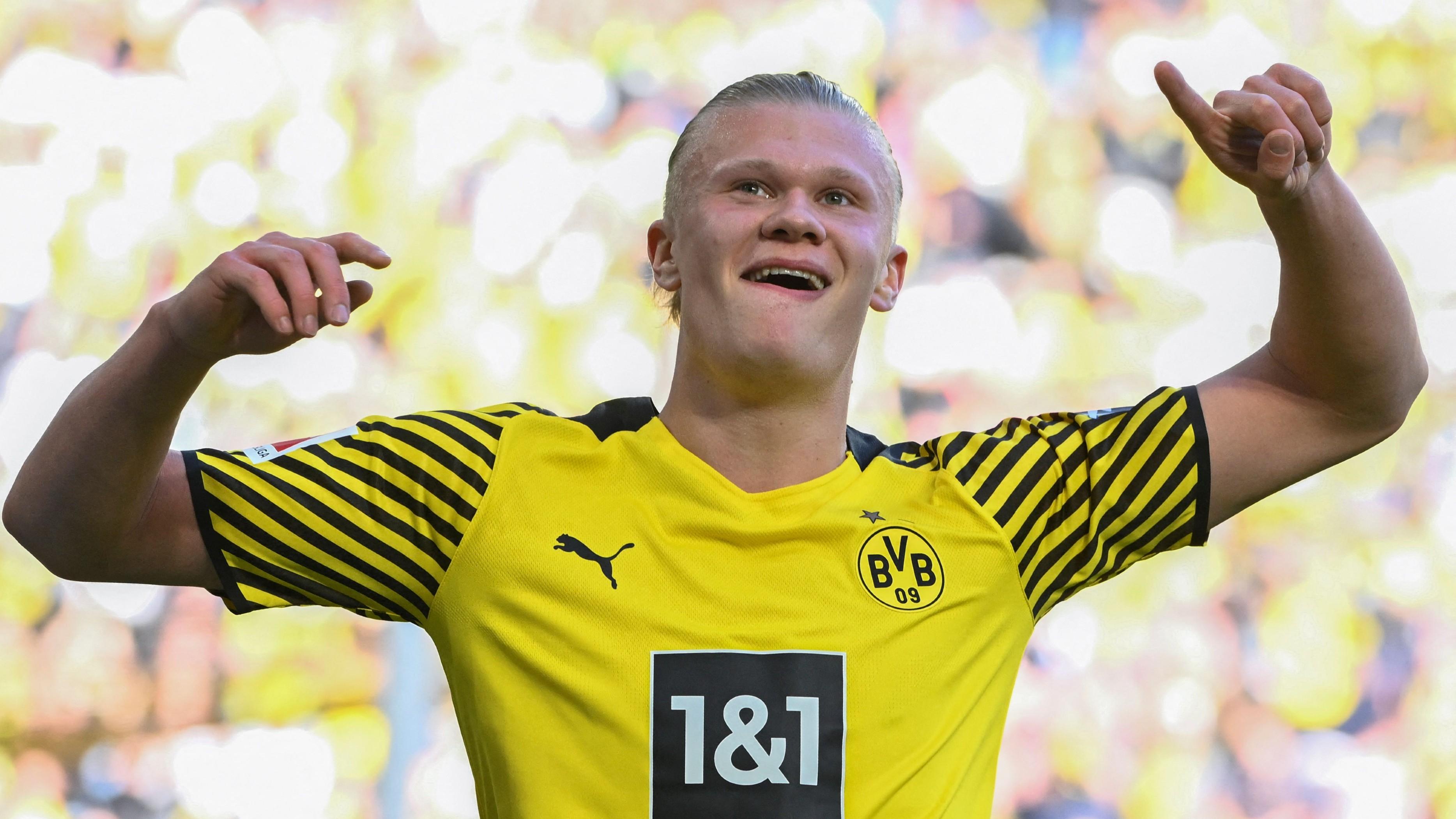 As of January 2022, Erling Haaland’s estimate net worth was around the £9 million ($12m) mark. The terms Haaland agreed when linking up with Dortmund are to be worth £132,000-a-week. Which means that he pulls in a little over £6.8m ($9m) on an annual basis. One report said his earning to be just £60 every week when starting his rise to prominence at Molde, with those terms only rising to £20,000-a-week at Red Bull Salzburg.

The 21-year-old’s salary appears set to skyrocket from this point, with a big-money transfer for 2022 seemingly in the offing. However, with the likes of Real Madrid, Barcelona and Manchester City all sniffing around one of the hottest prospects in world football, there has been talk of Erling Haaland taking his annual salary to £30m ($41m) in any move – around £577,000-a-week and alongside the likes of Lionel Messi and Neymar on the list of football’s biggest earners. 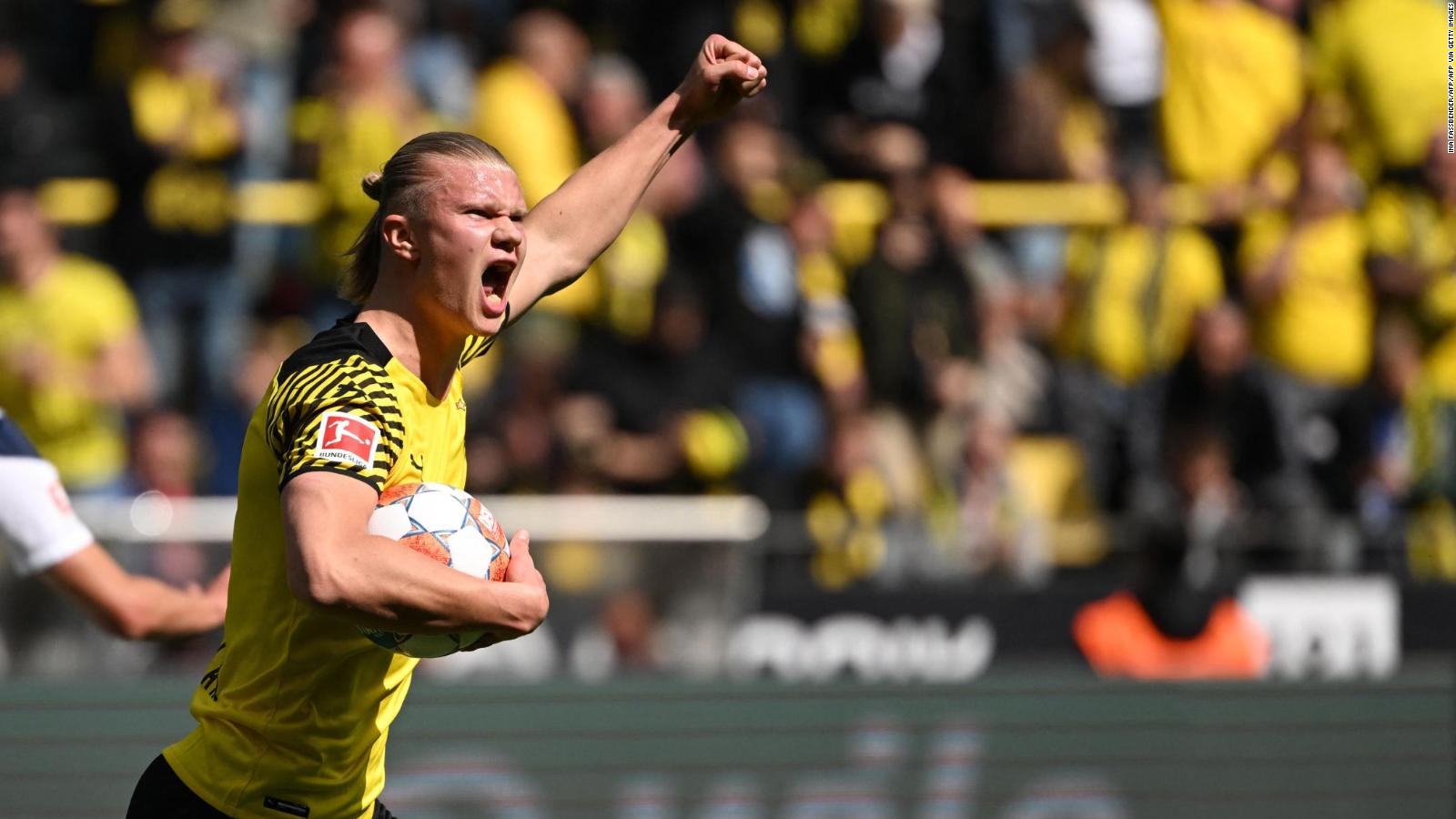 In his career with Bryne, Molde, Salzburg and Dortmund, the Leeds-born superstar has managed 135 goals in 196 appearances ahead of his 22nd birthday on July 21. That leaves Erling Haaland at the top of an extraordinary list of modern talent, who have all scored far fewer goals at a much slower rate than City’s latest recruit. Erling Haaland started his professional career at Molde, scoring 20 times in 50 appearances. He went on to amass 29 goals in 27 appearances for Red Bull Salzburg. Haaland joined Bundesliga side Dortmund next and has scored 86 goals in 89 appearances for them. He has won two Austrian Bundesliga honors with Salzburg, besides the Austrian Cup.

Despite achieving amazing lengths in his football career, the world cup is still a dream for Haaland. The 22 year old football star has yet not played in any World Cup and will not play this year’s upcoming season either. The Borussia Dortmund star will not play at next year’s tournament after defeat against the Oranje condemned his nation to third in Group G.

Erling Haaland missed Norway’s upcoming World Cup qualifiers due to leg injury and saw his dream of tournament football dashed for the second successive time after Norway came up short in a 2-0 defeat against the Netherlands in their final game of UEFA qualification for the Qatar 2022 World Cup.

The Borussia Dortmund striker had hoped to fire his nation to a spot at next year’s showpiece event, having helped Stale Solbakken’s side into a three-way race with the Oranje and Turkey.

However late goals for Steven Bergwijn and Memphis Depay ended Norway’s hopes following a match where they were second-best throughout, with Louis van Gaal’s side taking their place as group winners.

Though Erling Haaland will not be present in Qatar is, from a neutral perspective, a source of regret. He is already one of the world’s most devastating strikers, the scorer of 70 goals in 69 games since joining Borussia Dortmund in January 2020, including 13 in only 10 appearances this season.

The 22 year old Haaland is already the standard-bearer for soccer’s first post- Lionel Messi and Cristiano Ronaldo generation. By the time the World Cup rolls around November, he may be one of the most expensive players on the planet, too.

Manchester City is signing Erling Haaland from Borussia Dortmund. The 21-year-old will join the Club on 1 July after penning a five-year deal. It will keep him at the Etihad Stadium until the summer of 2027.

How many goals has Erling Haaland scored in his career?

In his career with Bryne, Molde, Salzburg and Dortmund, the Leeds-born superstar has managed 135 goals. It is in 196 appearances ahead of his 22nd birthday on July 21. That leaves Haaland at the top of an extraordinary list of modern talent, who have all scored far fewer goals at a much slower rate than City’s latest recruit.

Haaland’s dream of tournament football dashed for the second successive times after Norway came up short in a 2-0 defeat. It was against the Netherlands in their final game of UEFA qualification for the Qatar 2022 World Cup.

How much is Haaland worth on the market?

Erling Haaland has an estimated net worth of $12 million according to sources. The bulk of his income comes from his soccer endeavors and endorsement deals he often signs. As of June 2022, his market value is $183 million and is currently his highest.

What number is Erling Haaland for Man City?

Erling Haaland has elected to wear the No.9 shirt at Manchester City.-