Who is Stefanos Tsitsipas?

Stefanos Tsitsipas is a professional Greek Tennis player. So, as per the Association of Tennis Professionals or ATP, he ranks three among the top ten youngest players all over the world. Moreover, Stefanos Tsitsipas reached a landmark third rank all over the world on 9th August, 2021. So, this gives him the highest rank any Greek player has got in the history of Tennis. Moreover, he also won the 2019 ATP Finals. Therefore, he became the youngest champion of the year-end championships within the last 18 years. Moreover, has won seven singles titles in ATP, in total.

Stefanos Tsitsipas has got a rich legacy of Tennis from his family. So, his mother was Julia Apostoli. She played professionally in the Women’s Tennis Association of WTA. Moreover, his father was also a Tennis coach. Therefore, he started playing Tennis when he was as young as three. However, he started taking lessons properly when he was around six. He has been a star since the beginning. So, Stefanos Tsitsipas earned the first rank globally as a junior. Moreover, he also became the first Greek male in the Open Era who had won a junior Grand Slam title. Additionally, he also won the 2016 Wimbledon boys’ doubles event. So, he has been receiving training at the Patrick Mouratoglou Academy in France. He has been there for the past six years.

In 2017, Stefanos Tsitsipas won his first match on the ATP tour. Therefore, he rose high the ATP rankings very fast in 2018. So, he finished as a runner-up at the Canadian Open in 2018. However, it’s important because he was the youngest player who ever defeated the top four players within the span of a single tournament. In 2021, he reached his first Grand Slam final. However, he lost to Novak Djokovic.

So, he hails from an illustrious background. So, he got an exposure to the game from a very early age. Therefore, in the following sections, we will see more of his early life and career beginnings.

So, Stefanos Tsitsipas took birth on 12th August, 1998. His father is Apostolos Tsitsipas and mother Julia Apostoli. Both of his parents are Tennis professionals. He was born in Proastio in Kardista. However, his mother has a mixed Greek and Russian descent. So, his mother had represented the Soviet Union in the Federation Cup. She too had been a top world junior during her times. Moreover, when his mother gave him birth, both his parents were working as tennis instructors at the Astir Palace resort hotel in Vouliagmeni. So, they had met each other in one of the tours in which his mother had played, in Athens. Moreover, Stefanos Tsitsipas has three younger siblings. They are his two brothers Petros and Pavlos as well as a sister Elisavet. It is interesting because all the siblings play tennis professionally. 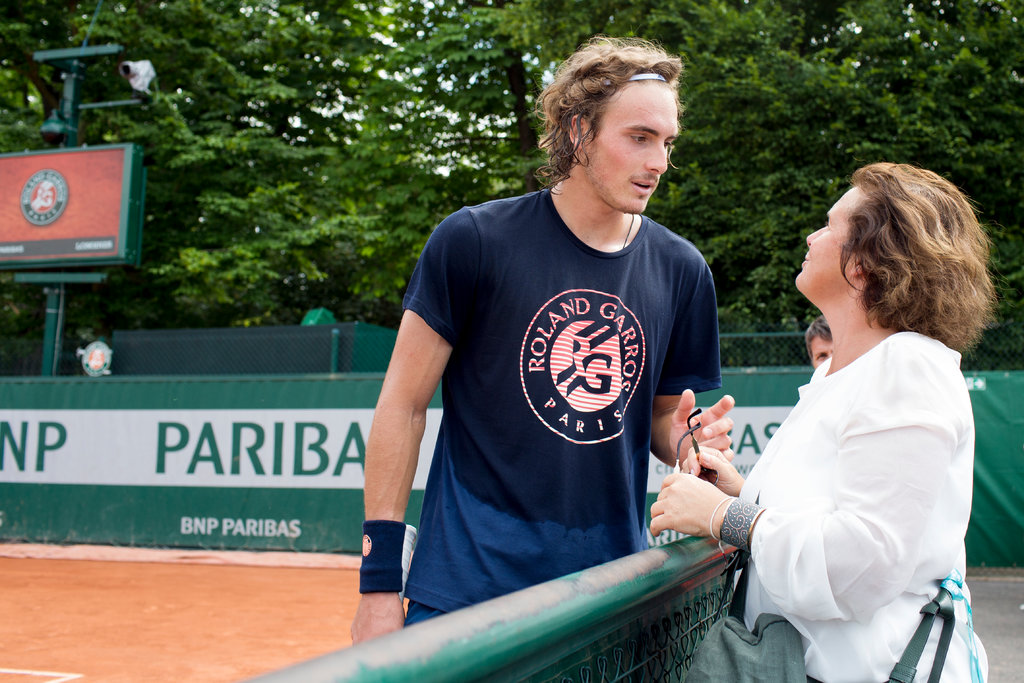 So, one can easily guess why Stefanos Tsitsipas started playing Tennis so early in life. He has grown up watching Tennis games on the TV. However, as a kid, he also played football and did swimming. However, Stefanos Tsitsipas himself says that becoming a Tennis player was absolutely his own decision. So, he told it to his father one morning when he was only nine. He had always loved the competition and the challenges in the court.

So, Stefanos Tsitsipas joined the Tennis CLub Glyfada near Athens to take Tennis lessons when was only six. However, his father had always been his primary coach. He continued at Glyfada till 2015. Since then, he has had to split time between France and his own homeland, Greece.

So, Stefanos Tsitsipas was a former top world junior. When he was only 14, he started playing in the junior circuit of ITF in 2013. Moreover, his first high-level Grade A tournament was the Abierto Juvenil Mexicano in November 2014. However, he still made it to the final of his second career “Grade A” event at the Orange Bowl. All this happened within the span of a month. So, Stefanos Tsitsipas was outside the top 100 junior rankings when he began playing in the tournament. It was in 2015 when Stefanos Tsitsipas got the first chance to play in the tournaments of the junior Grand Slam. Among the four games, his best output was the quarterfinal at the Australian Open. However, he won no singles in 2015. But, he finished as a runner-up at the Orange Bowl. So, in this case, Miomir Kecmanović defeated him in a third tiebreaker set. Therefore, by the end of the season, Stefanos Tsitsipas had earned the 14th rank in junior world rankings. However, 2016 was the landmark year in the career of Stefanos Tsitsipas. So, he reached all eight quarterfinals of the tournaments where he played. Moreover, these included the four Grand Slams too. So, he won his first Grade A title at the Trofeo Bonfiglio. Therefore, this made him the highest ranked junior all over the world. Moreover, he also won the European Junior Championships in 2016. However, his biggest success of the season came when he partnered with Estonian player Kenneth Raisma for doubles. So, he won his only junior Grand Slam event. This was at Wimbledon.

However, the doubles were not his only success that year. Stefanos Tsitsipas also made it to both the Wimbledon and US Open semifinals. Therefore, by the year ending, he had got a second rank.

According to the ATP tours and ITF websites, one can find an overview in the career stats of Stefanos Tsitsipas. So, in this section, we will see not all, but some of his main matches that defined his career as a tennis player.

So, Stefanos Tsitsipas has a record of both singles and doubles wins in his short but wonderful career. We will check them out here, but separately. 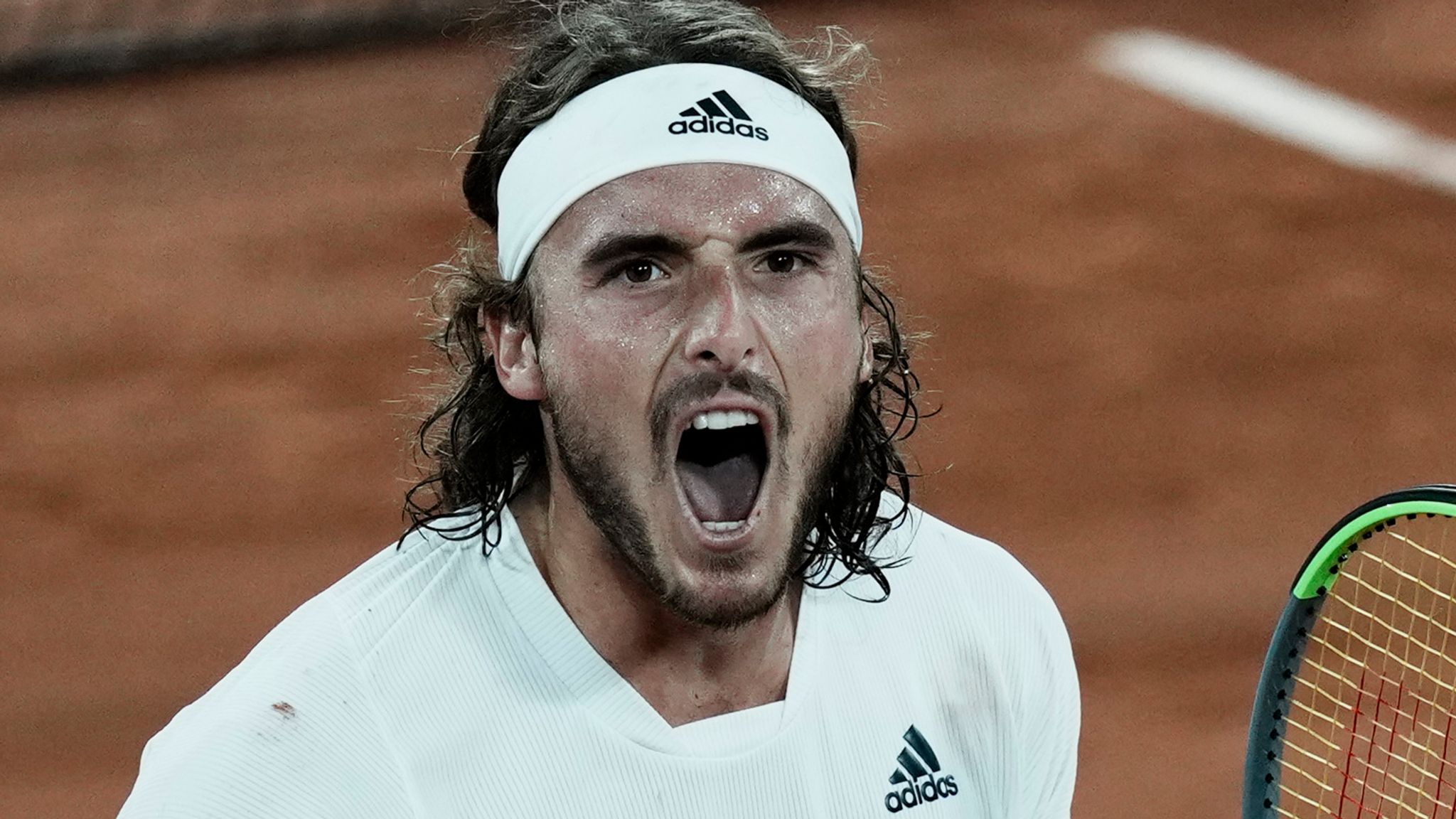 Now, Stefanos Tsitsipas has a winning rate of 0 in doubles. However, this is also because he has not played in many of them. So, he has not played in the doubles of Grand Slam tournaments, or Year-end tournaments, or the Olympic Games. Moreover, he has not even participated in the doubles of either the ATP Tour 500 or the ATP tour 250. So, he has played in only one doubles. This is of the ATP Masters 1000. However, he did not win it either. Therefore, he has lost the only doubles match that he has ever played in Tennis. So, adding up both his singles and doubles, Stefanos Tsitsipas has played 18 matches in total. However, among the 18, he has lost in 8 of them. These include the 7 matches that he lost in singles and the one in the only doubles that he ever played. So, he has 7 wins in his bag. Therefore, he has a total winning rate of 0.39.

Stefanos Tsitsipas has become a leading figure in the next generation of Tennis players. Moreover, he is very popular too. Hence, youngsters all over the world were intent on knowing whether Stefanos Tsitsipas would be playing the US Open 2021. They had a lot of expectations as well. So, he did enter the US Open with a lot of spirit and force. This is because he had an amazing season at the Slam where he delivered some brilliant performances. However, the US open was clearly not the place where the young Tennis star could shine out from the rest. So, another rising star of Spanish origin- Carlos Alcaraz defeated him. Therefore, he had to move out of the tournament. 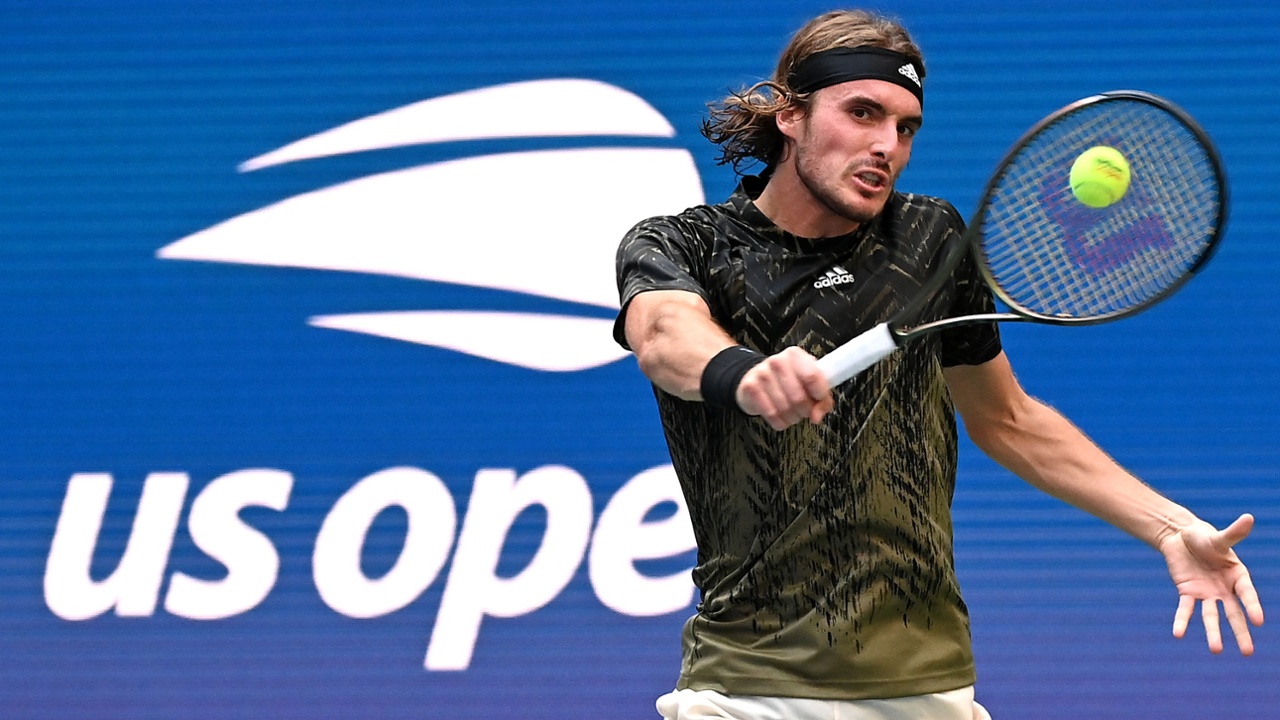 However, the light of the US Open 2021 was in something else. Stefanos Tsitsipas had taken a very long bathroom break. So, this became suspicious too. However, after losing, he swiped off all accusations. He labeled them as falsification of the very spirit of gamesmanship.

After his ATP matches in 2017, the rankings of Stefanos Tsitsipas had risen very quickly. In the previous season, he had an amazing season at the Slam. So, he had been number 3 in world Tennis rankings which is practically unbelievable. However, his loss at the US Open 2021 did cost him much. So, he slipped from his previous ranking. In the current set of seasons, he is at number 4. So, his total points are 6540. Currently, Novak Djokovic tops the world rankings with a total of 11, 540 points.

So, Stefanos Tsitsipas has not been very public about his personal life or love interest. However people will always be interested in the life of a tennis star who is now the fourth best in the world. So, his girlfriend is Theodora Petalas. She was born in London. However, she graduated from New York University with a degree in project management. The tennis star accepted that they have known each other and been in a relationship for around 4 years now. So, they had originally met in Brooklyn, New York via family friends. 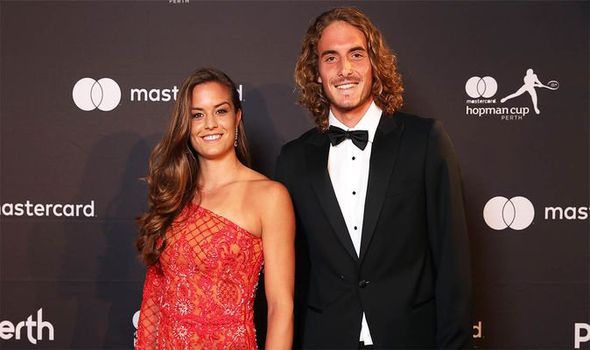 So, those who have already seen his matches would know he is quite a tall person. He has a height of 1.93 meters. Hence, it is more than 6 feet which is very tall indeed. Moreover, he is heavily built with a weight of around 89 Kgs.

So, the young tennis star is quite active on Twitter too! Therefore, you can find and follow Stefanos Tsitsipas on his ID @steftsitsipas.

He is on Instagram too! Moreover, he has more than a million followers here. You can find and follow him on his ID that is @stefanostsitsipas98. 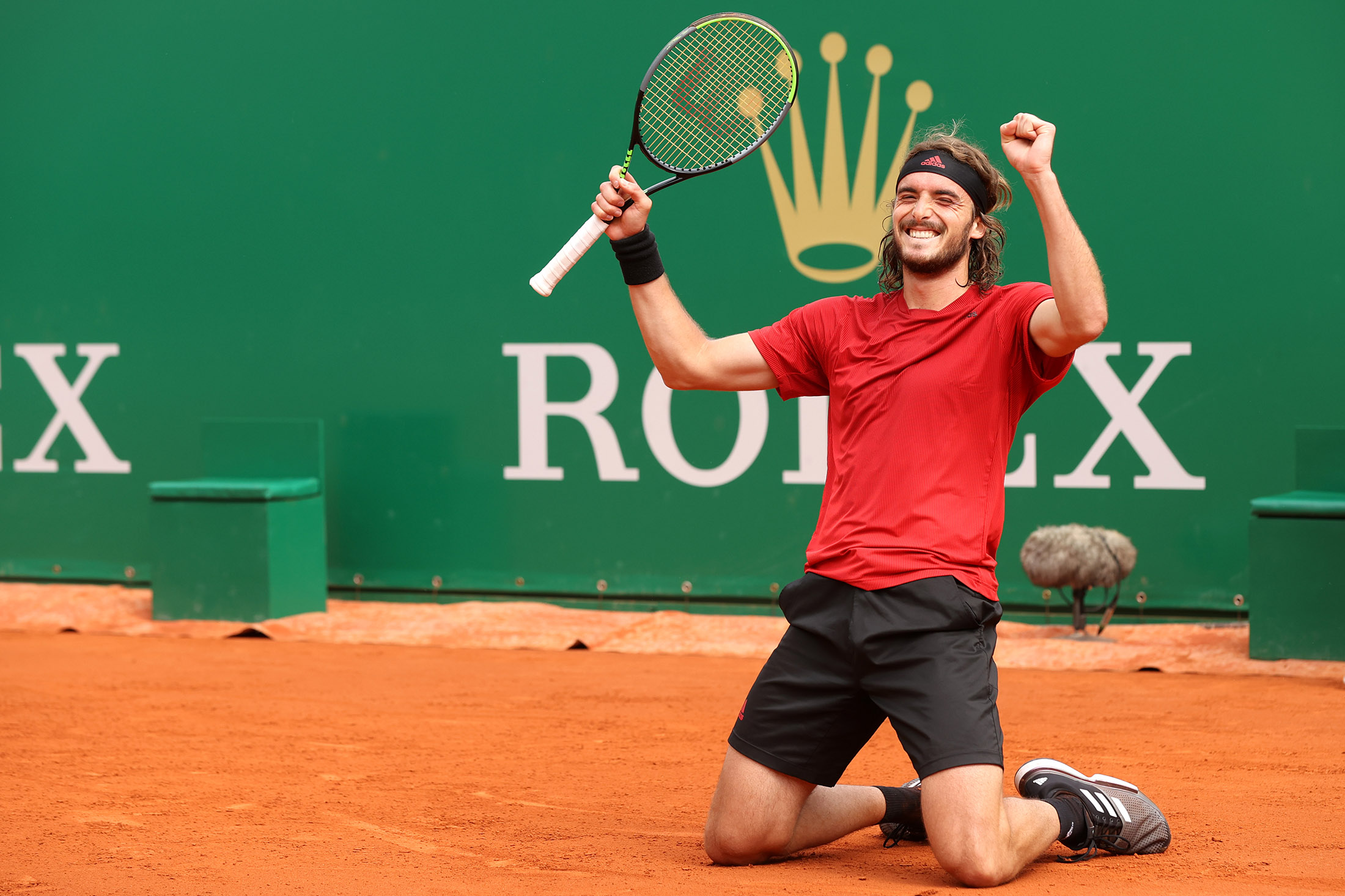 Where does Stefanos Tsitsipas Live Now?

Ans. The young tennis star lives currently in Monte Carlo. So, it just takes him 45 minutes to drive to the Patrick Mouratoglou Academy. This is where he currently trains himself. This, moreover, is located in Sophia Antipolis. So, he is currently based in the southern area of France. However, from time to time, he visits his hometown Athens, in Greece as well.

Ans. Yes, he is very much interested in other games too. He is a big fan of both the football and basketball teams of AEK Athens. Therefore, he supports both of them. Moreover, he also has a hobby of vlogging. So, he has his own YouTube channel too. He posts videos of his travels and more over here.

What is the nationality of Stefanos Tsitsipas?

Ans. So, Stefanos Tsitsipas has Greek citizenship. He is the greatest Tennis player that Greece has ever produced.

When was Stefanos Tsitsipas born?

So, Stefanos Tsitsipas took birth on 12th August, 1998, in Athens. It is interesting because Pete Sampras was also born on the same day. So, Pete Sampras too is another famous player who belongs to Greece originally.

The Dangers Of Betting On Illegal Bookies