Angel Di Maria, sometimes known as Noodle, is an Argentine footballer. So, he is a member of the Argentina national team as well as the Seria A club Juventus. Then, he made his professional debut in 2005 with Rosario Central, before moving to Portugal to join Benfica in 2007. So, he joined Real Madrid for 25 million Euros after three years of playing.

He was a key player for the team throughout the 2011-12 La Liga and UEFA Champions League seasons. Then, he joined Manchester United in 2014 for 59.7 million Euros. So, he only stayed with the club for one season before joining PSG for 44 million euros. So, he has participated in three FIFA World Cups and four Copa America competitions for his country. Then, in this article, we are talking about this player. So, keep reading to know more about him.

Angel was born to Diana Hernandez and Miguel Di Maria on February 14, 1988 in Rosario, Argentina. So, Angel has been involved in sports since he was a toddler, beginning with football at the age of three. Also, Angel is from a poor household, therefore he and his two sisters, Vanesa and Evelyn, assisted their parents in the local coal yard. Then, he  joined the Rosario Central club in 1995 and graduated from the academy in 2005. After graduating, he made his professional debut for Rosario on December 14, 2005, in a 2-2 tie against the Apertura. On November 24, 2006, he scored his first goal. After viewing his performance at the 2007 FIFA U-20 World Cup, English club Arsenal recruited him, but Angel declined to join the club. 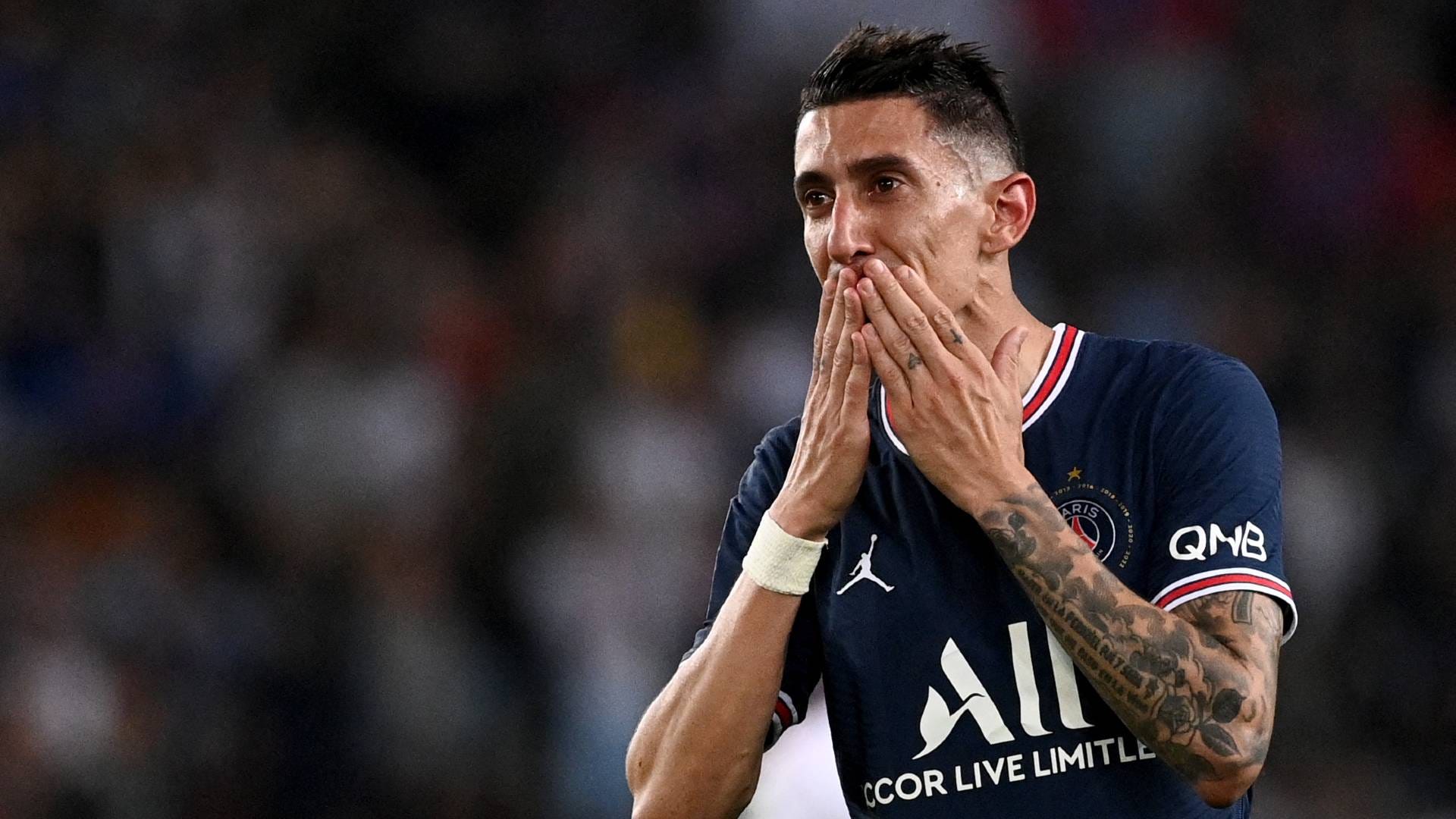 On May 19, 2010, Di Mara was named to Argentina’s 23-man roster for the 2010 FIFA World Cup in South Africa by manager Diego Maradona. Then, he scored his first international goal in a 5-1 friendly win against Canada on May 24. So, he helped Argentina reach the World Cup quarterfinals by appearing in all five of Argentina’s matches and starting four of them. Following the World Cup, Di Mara scored the first-ever international goal at Dublin’s new Aviva Stadium on 11 August 2010 in a friendly against the Republic of Ireland, which Argentina won 0-1.

Di Mara appeared in 12 FIFA World Cup qualifying matches and was named to Argentina’s national squad for the tournament finals. So, Di Mara scored the sole goal of Argentina’s round of 16 encounter against Switzerland after 118 minutes, thanks to a Lionel Messi assist. Then, he suffered a thigh muscle strain during the quarter-final match against Belgium and was subsequently removed off the field. Following the match, it was revealed that Di Mara would miss the rest of the tournament due to an injury. 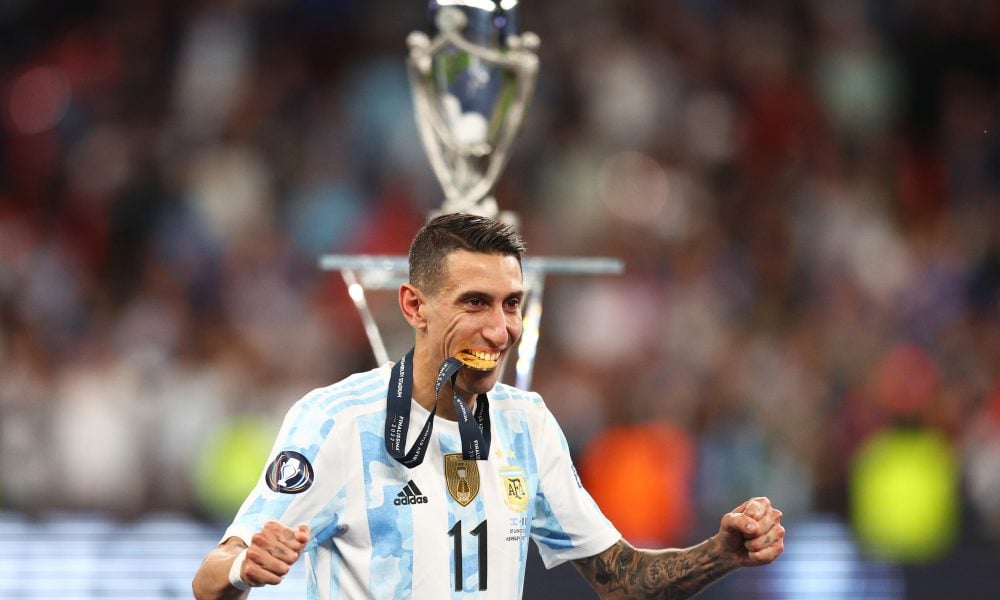 He had earlier assisted in Gonzalo Higuain’s sole goal of the game, which sent Argentina to the semi-finals. Argentina finished second to Germany in the competition. On July 11, Di Mara was chosen to FIFA’s ten-man shortlist for the Golden Ball award, which is given to the tournament’s finest player. Then, he played a role in all four of Argentina’s goals in a 2-4 victory against world champions Germany on September 3, 2014, assisting three and scoring one.

Angel Di Maria scored an unbelievable goal in the first half of Argentina’s FIFA World Cup 2018 Round of 16 encounter against France to tie the game after Antoine Griezmann converted a penalty in the 13th minute. Di Maria fired a stunning attempt beyond the penalty area past Hugo Lloris to tie the game at 1-1. Also, the PSG winger raised his head before unleashing a stunning left-footed shot into the top-left corner. It was also Argentina’s first shot on goal in the game. Argentina seized a 2-1 lead in the second half when a Lionel Messi effort was deflected off Gabriel Mercado’s foot. Benjamin Pavard delivered a breathtaking long-range equaliser for France, as if to illustrate that he is capable of even more spectacular goals. France won the dramatic encounter 4-3 and advanced to the quarterfinals. Kylian Mbappe, a teenager, scored two goals in an outstanding showing in Kazan. Mbappe, 19, scored twice in the second half to put France 4-2 ahead, and despite a late scare from Sergio Aguero with an injury-time goal, France hung on.

Angel Di Maria is not resting on his laurels, with Argentina’s 2021 Copa America winner claiming that a spot in the 2022 World Cup is not yet guaranteed. Also, the winger’s goal in last summer’s final at Rio de Janeiro’s legendary Maracana ended the Albiceleste’s 28-year drought for a major trophy.

The PSG winger is one of the most well-known and popular Argentine footballers in the world. According to the Celebrity Net Worth website, his net worth is $18 million. PSG pounced on the opportunity to capture Di Maria in 2015 after he struggled at Manchester United. So, he inked a new deal with the French giants in October of 2018, which pays him an annual salary of $14.4 million or around $280K per week. So, he got a contract extension in 2021 that keeps him in Paris until the end of June 2022. 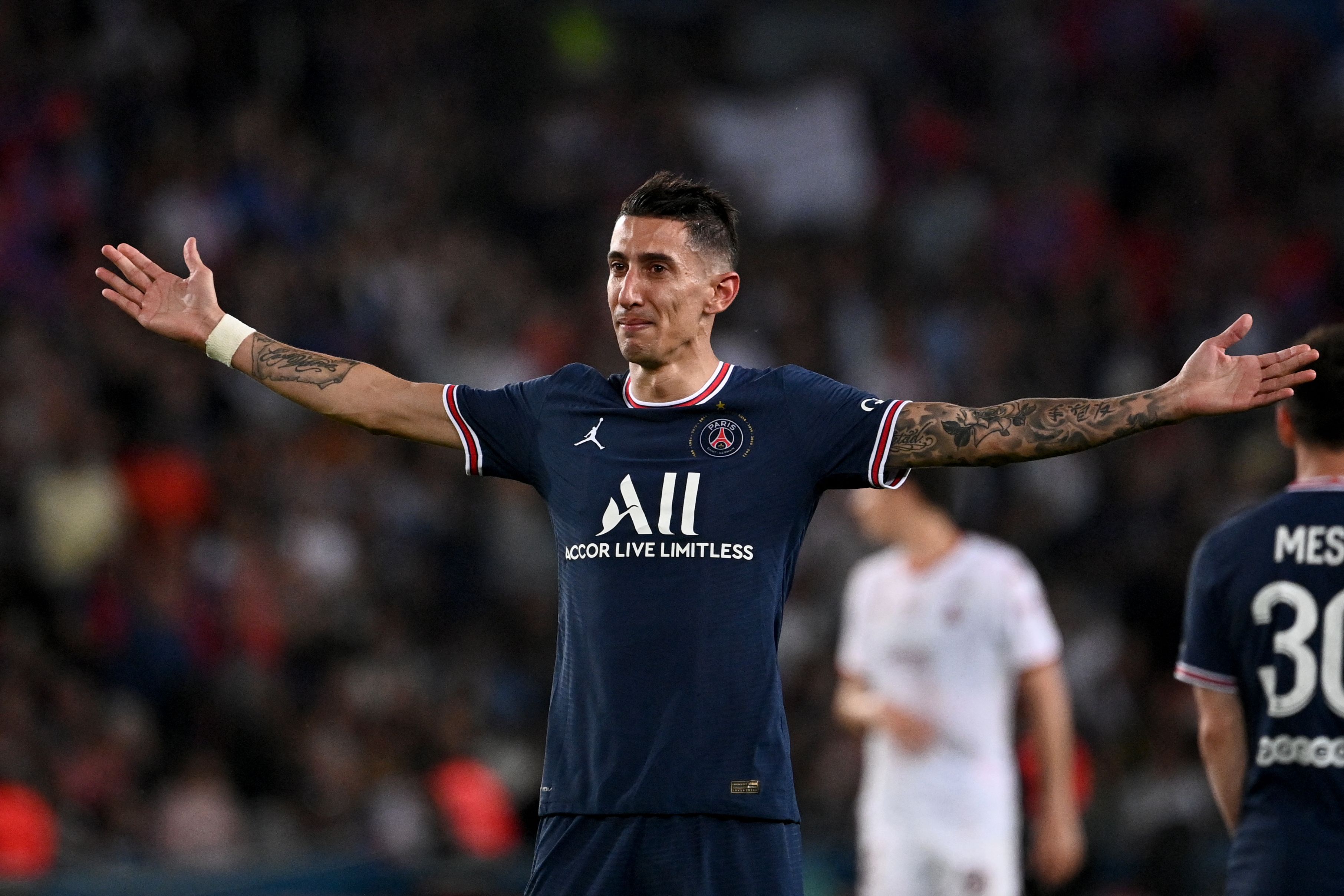 Di Maria was one of the most valued footballers in the world during his time, and as such, he was sought after by numerous clubs. However, at the age of 34, he is nearing the end of his career, and his market worth has steadily declined over the years. Di Maria has also had a difficult time with injuries in recent years. Then, in today’s transfer market, he is worth over $17 million.

Angel Di Maria and Jorgelina Cardoso have known one other for a long time. Also, the pair married in 2011 after dating for several years. Then, in 2011, they married in a magnificent wedding ceremony attended by close relatives and friends. Jorgelina Cardoso was born into a poor Argentine household. Her constraints did not prevent her from travelling the world and accompanying her spouse wherever he went. Despite the fact that the couple has been together for a long time. Many admirers are misinformed about their connection. Jorgelina doesn’t disclose much personal information online, making it difficult to find her. 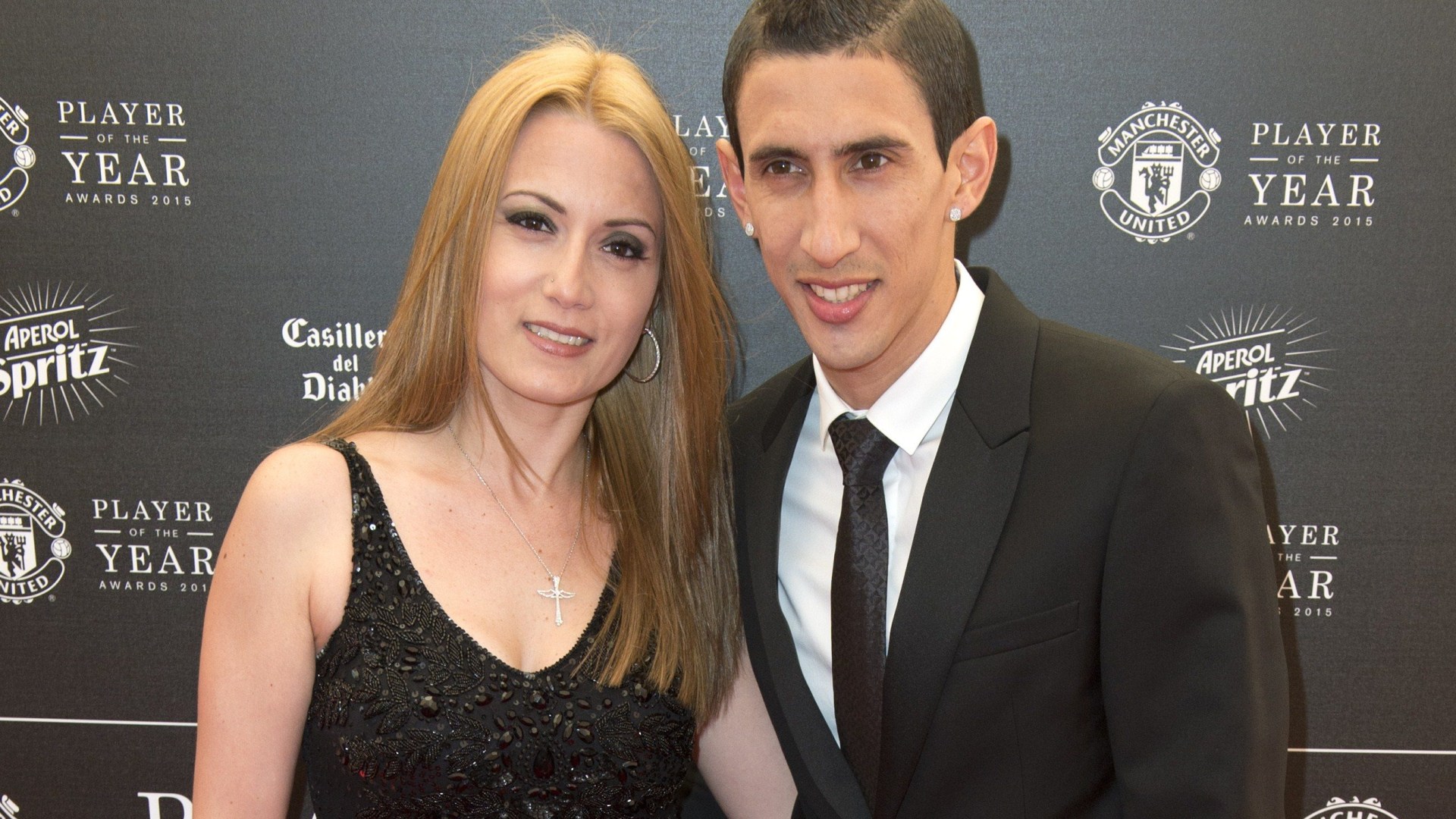 Jorgelina and Angel Di Maria are parents of two children. Mia Di Mara, their first child, was born in 2013. Their newborn infant was placed in a special facility due to early delivery. However, after six months, the hospital discharged her, stating she was completely well. On November 3, 2017, the couple welcomed their second daughter, Pia Di Maria.

On 8 July 2022, Di María joined Juventus as a free agent after signing an annual contract.

How many trophies has Di Maria won with PSG?

Di Maria spent the previous seven years with PSG, where he won 14 major trophies, including five Ligue 1 crowns, before departing as a free agent at the beginning of this month.

Angel Di Maria has stated that he would be quite sad if he were to leave Paris Saint-Germain without having won the Champions League. Then, in his career, the 33-year-old has won 17 trophies, but he believes that winning Europe’s top trophy with PSG would be remarkable.

Also, he will leave Paris Saint-Germain after seven seasons. Also, the contract of the Argentina winger has expired, and the French champions confirmed his exit late Friday night. PSG president Nasser Al-Khelaifi remarked, “Angel Di Maria has left an indelible stamp on the history of the club.”

The surname Di maria was originally found in Genoa, Italy, and thereafter spread throughout the country. As surnames became more common in Italy, this name arose independently in several sections of the peninsula.

Argentina winger Angel Di Maria has signed a one-year contract with Juventus in Italy. After a seven-year stint with Paris Saint-Germain, Di Maria became a free agent this summer and has opted to begin working under head coach Massimiliano Allegri for the next season.

How much was Di Maria sold to PSG?

According to Samuel Petrequin of the Associated Press, Di Maria has signed a four-year deal. So, he will be paid over €11 million (£7.7 million) every year.